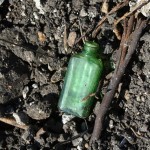 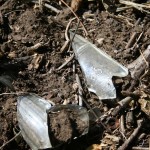 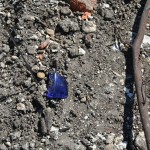 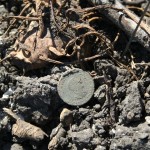 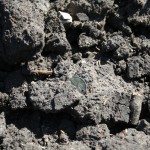 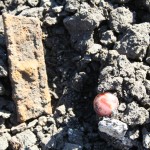 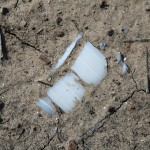 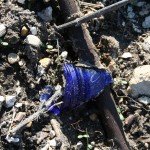 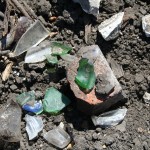 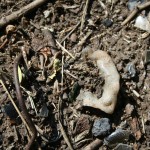 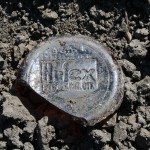 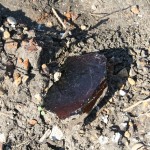 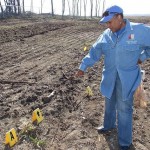 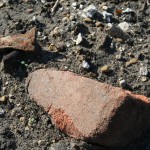 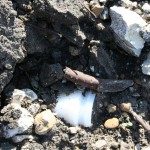 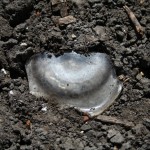 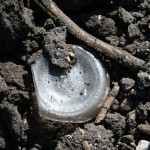 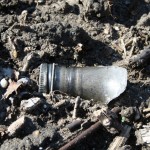 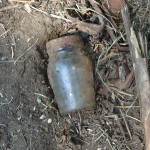 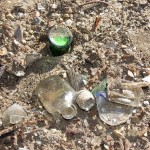 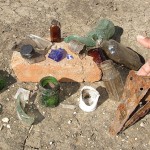 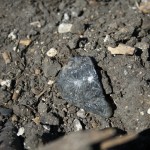 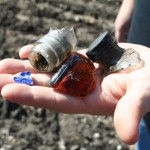 Photographs by Judy Yates   EXERCPT FROM POWERPOINT PROGRAM THAT I AM AVAILABLE AS A PUBLIC SPEAKER: “Worthless Trash or Cultural Treasure: Burial Artifacts and the Symbolism in African American and Christian Cemeteries.”

“Burial items placed on top of graves, especially in African American cemeteries, may look like worthless trash but almost every item may be cultural treasure with symbolism and blending of beliefs belonging to the items found on tops of the graves of the people buried there. Yes, you may find empty contemporary cans of coke or beer that may truly be trash but most of these items I will share with you are items that have been found on top of a grave or within the area of that grave. The same type of grave items may be found over and over such as coins, broken china and pottery, glassware, vases, metal pipes, bricks, marbles, toys, glasses, clocks, old glass liquor bottles, medicine bottles and jars, door locks, seashells, etc. in these little historic cemeteries.

African American cemeteries appear to have a melding of both Christian and African religions because there is one observation that the enslaved Africans brought to America believed they had been conquered by a powerful “tribe,” which was ruled by God and Jesus Christ. So the enslaved Africans accepted the new, powerful God of Christianity, mixed with the Gods and traditions that had been brought from Africa.[1]

“But most of all, the Christian description and hope of heaven was truly welcomed and a much needed escape from the earthly life of hard work as well as the horrible physical and emotional treatment of the enslaved African Americans by their new owners.”[2]

Because African American’s were unjustly enslaved, their belief was they may have been owned during life but they will not be owned in death. There was a belief that if the slave owner did not know the burial location of the slave, the enslaved African would be free to return to Africa in the Afterlife.[i]

During slavery, African American graves would usually be marked by a field stone, metal pipe, seashells, broken pottery and glassware, light bulbs, broken mirror, rosebush, shoes, coins, vases, cups, toys, iris, etc., and the location of the grave would be handed down as oral history to each generation. Also, it was a Kongo belief that anything of value to the deceased or was touched by the deceased loved one was placed on their grave. [3]

Usually, African American cemeteries were to be kept completely overgrown, especially if burials had ceased, because it was hoped that the dead will not be disturbed by the living if the graves are lost under the green vegetation.[4]

In other African American and Christian cemeteries the graves are completely scraped clean of any grass. The reason for this was because it was a sign of disrespect for livestock to urinate or defecate on a grave; prevent grass fires; prevent snakes which were the devil and the sandy soil looked like the dirt of Africa.

The following are African American and Christian beliefs that are still found in our Texas historic cemeteries. Some of these burial artifacts and their symbolism were found in the historic 1860 St. Mary Cemetery in Ellis County, Texas that has been partially destroyed:

1.The Nagwas of Ghana and in the Congo Basin of Central Africa,[5] have their graves face in an east/west direction-Christian symbolism that our loved ones were to face the rising of the sun in the east to see the second coming of Christ. A person should not sleep or be buried crossways with the world. It also symbolizes the African tradition that their loved ones will face their homeland of Africa in death. One may have been enslaved in the past, but death meant going home and was a great celebration.[6] (The graves in the St Mary Cemetery are placed in an east/west direction).

In African American/ Christian cemeteries if one committed murder or, unfortunately, suicide, they were buried in a north/south position so not to be able to see the second coming of Christ.[7] The north-south axis was considered an evil axis in West Africa. (At this time, no graves in the St. Mary Cemetery were found to be in a north/south direction.)[8]

The West African Bakongo belief was to place items on the graves that would be connected to water such as cups, glasses, vases and seashells.[11] (At the St. Mary Cemetery pieces of cups, glasses, bowls and vases were found in thousands of broken pieces because of being plowed over and over by the land owner employees. No seashells were found at this time.)

It was believed that the sea shell encompasses the soul’s immortal presence. The scallop shell symbolizes a journey, as well as representing the sea that brought the Africans to America and would take them back to Africa in the afterlife.[12]

The conch shell represented the sign of rebirth as well as symbolized the female and male reproduction organs. The thicker shell is male the thin shell is female.[13]

The most popular shell used has been the oyster shell bleached white and placed in rows on top of graves. Because a shell may contain a pearl, it can also symbolize good luck and prosperity. [14]

Seashells were used as decoration as well as providing a practical purpose by covering the graves with solid rows of shells which  kept the grass from growing on the graves.[15] The Yoruba used seashells as grave decoration.[16] (In Sunnyvale, Texas, we have a couple of graves that are entirely covered with oyster shells in cement in Anglo cemeteries. Since the days of slavery, African Americans took care of the Anglo cemeteries and their African burial traditions were blended with the Christian beliefs which are still used in African American and Christian cemeteries to this day.)