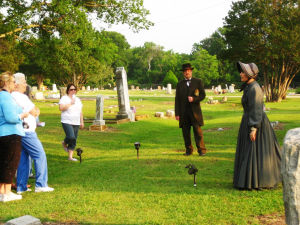 Mesquite Cemetery, the resting place of many of the city’s pioneers, is located at 400 Holley Park Drive, just south of downtown. Although it was in use before the town was officially platted, the site was deeded for cemetery use in 1892. It received its historical designation in 2001.

“We describe the meander as a walking tour of the cemetery that comes to life.”

Hanging out in a cemetery isn’t the first thing most people think of as entertainment. Historic Mesquite Inc., along with the Mesquite Community Theater, have managed to turn Mesquite Cemetery into a unique entertainment opportunity and history lesson for the past several years with their Moonlight Meander events. Residents will have the opportunity to see history come to life again this year on May 16 and 17.

“The Mesquite Meander has been a great event for us,” said Emily Tosch, event coordinator, in a release from Historic Mesquite Inc. “We have such rich history in our community, and this event allows us to teach it in an interactive and fun way.”

The meander allows participants to walk through the cemetery where they will be met by actors portraying various people buried within the cemetery.

“We describe the meander as a walking tour of the cemetery that comes to life,” said Becky Allen, Historic Mesquite Inc. assistant executive director.

Each actor will stop the group and tell their life story. This year there will be 10 people portrayed at seven different stops within the cemetery.

“This year, the people we are featuring are not people that you would typically recognize,” Allen said. “The Mesquite Community Theater plays a huge role, with most of the actors coming from there. Our organization oversees the whole thing and finances the costumes for the event. The actors volunteer their time to learn and perform their roles.”

Each group participating in the meander will be led through the cemetery at 10-minute intervals. This will allow for a total of 13 tours per night, beginning at 7 p.m. on May 16 and 6:30 p.m. on May 17. Each tour group will contain no more than 16 people.

Tickets will go on sale March 31 and will be a flat fee of $10 this year. The event is not age-appropriate for those younger than 7. Tickets may be purchased by calling the Historic Mesquite office at 972-216-6468. The event has sold out quickly each year, so Historic Mesquite Inc. recommends calling early to reserve a spot.

“We look at this event as an educational tool. We try and use the funds to cover our costs for producing it,” Allen said.

In May, 2014, Historic Mesquite Inc. will be having it’s fourth Mesquite Moonlight Meander Cemetery Tour at the 1859 Mesquite Cemetery located at 400 Holly Park Drive, Mesquite, Texas. State tune and I will share with you the dates when they become available as well as their program.

Meanwhile, this video is of Dr. Graveyard and Charlene Orr, the Executive Director of Historic Mesquite Inc., filmed last May, 2013, explaining what the Mesquite Moonlight Meander Cemetery Tour is about.

Saturday, May 3, 2014 Presented by Dallas Historical Society
official website
Grove Hill Cemetery Walking Tour with Paul McLin and Frances James (assisting as health allows) on May 3, 2014 (Saturday) from 10:00 AM to 12:00 PM. Tickets are $10 for members and $20 for non members

Grove Hill Cemetery marked its 100th birthday in 2011, and it is still a very active cemetery.  It contains an impressive array of monuments to 20th century movers and shakers of Dallas, as well as the largest and best collection of mausoleums in the county.  Anyone that has been in the Dallas area for any length of time will feel a special connection to the illustrious people interred at Grove Hill.

The entrance to Grove Hill Cemetery is on Samuell Boulevard, just east of the intersection with Lawnview.  Tour attendees will park in the parking lot just inside the entrance on the right.

This is a walking tour only.  Participants will meet at the designated cemetery for the tour.